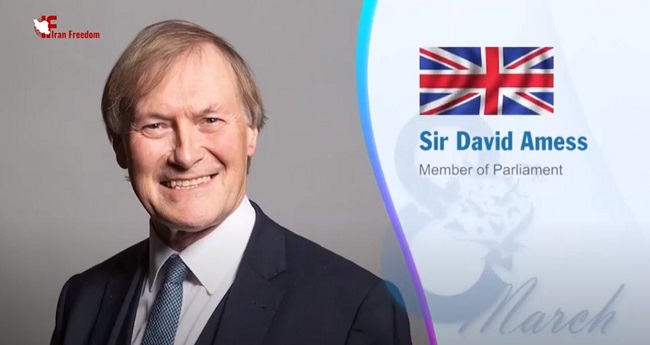 Sir David Amess, Member of Parliament from the UK

Sir David Amess, Member of Parliament from the UK addressed an online panel supporting women’s rights in Iran to mark International Women’s Day on March 8, 2021.
A panel of 30 Members of Parliament and women’s rights activists from the UK and Europe urged their governments to put human rights at the forefront of Iran policy during an online conference sponsored by the British Committee for Iran Freedom on International Women’s Day, March 8, 2021.
The cross-party speakers called on the UK and EU governments to work together to put pressure on the regime to release all political prisoners, prisoners of conscience, protesters, and dual citizens held under arbitrary charges in Iran, especially the women. Speakers urged the UK and EU to make economic and political relations and agreements with the regime in Tehran contingent upon verifiable improvements in human rights and women’s rights. They stressed that Iran stands on the brink of change as the regime has no solutions to any of the economic and social crises facing it and that growing popular dissent in the country rejects the theocracy in its entirety and demands regime change.
The President-elect of the National Council of Resistance of Iran (NCRI), Maryam Rajavi, was the keynote speaker at the conference speaking alongside the panelists including several former ministers.

Sir David Amess, Member of Parliament from the UK

The truly shocking video that we have just seen really demonstrates it firsthand why this conference is so important today. We believe that throughout the world, discrimination exists against women and girls, and it’s rampant. And in some countries like Iran, it is in fact getting worse. But we also know that equality for women is progress for all.

In that context, the Iranian regime is creating more concern and worries for the world while the Iranian resistance movement is making the world hopeful with its progress.

The clerical regime has an appalling human rights record. It has continued to arbitrarily arrest social and political activists and has been using violent measures to extract false confessions from prisoners, later using them against them.

The conditions of those who have been arrested during the uprising and protests, like the one in November 2019, and the recent one in system Gulistan is outrageous. The regime has also continued torture, and ill treatment of prisoners, particularly political prisoners, and detained protesters who also include women and young girls.

In a shocking report, Trampling Humanity published in September, Amnesty International revealed terrific accounts of torture and execution against the detained protesters of the 2019 uprising.

Amnesty International has investigated the actions of the Iranian authorities against those arrested in connection with the protests and concluded that they committed widespread patterns of serious human rights violations, including arbitrary detention and forced disappearance, torture and other ill treatment and also flagrant breaches of the right to a fair trial. And I urge everyone to read the report that has been done on this.

The Iranian regime continued its use of many evil and inhumane punishments in 2020. In September, the regime’s judiciary branch in Urmia northwest Iran sentenced four men to have four fingers amputated, each out dreadful while the IRGC dominates Iran’s economy, the regime plunders the national wealth. The regime’s judiciary issues are sentences for petty crimes, such as thievery.

The Iranian regime’s border forces continued the killing spree against deprived borders, who must carry really heavy loads as the breadwinners of their families. This job is a direct result of the regime’s institutionalized corruption and plundering of the national wealth. In other words, poor Iranian porters are under double pressure, poverty and oppression.

So, it is quite obvious that the clerical regime is at war with Iran’s population, both inside and outside Iran. It extends its human rights violations to outside its own borders.

One such dreadful case was the [foreign] case near Paris, which was planned to blow up a large gathering of the Iranian resistance, as suggested by the chairman of the Foreign Affairs Committee in the United Kingdom Parliament. We need a robust policy for the Iranian regime.