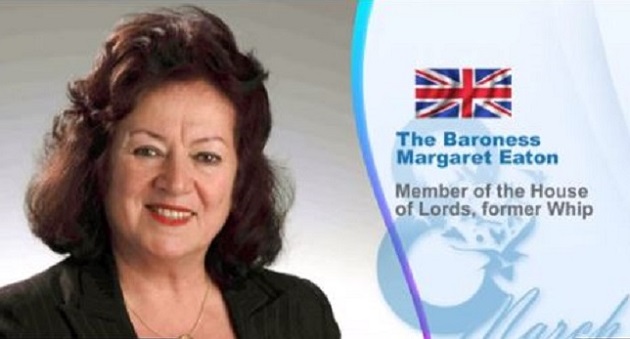 Baroness Eaton, Member of the UK House of Lords

Baroness Eaton, Member of the UK House of Lords addressed an online panel supporting women’s rights in Iran to mark International Women’s Day on March 8, 2021.
A panel of 30 Members of Parliament and women’s rights activists from the UK and Europe urged their governments to put human rights at the forefront of Iran policy during an online conference sponsored by the British Committee for Iran Freedom on International Women’s Day, March 8, 2021.
The cross-party speakers called on the UK and EU governments to work together to put pressure on the regime to release all political prisoners, prisoners of conscience, protesters, and dual citizens held under arbitrary charges in Iran, especially the women. Speakers urged the UK and EU to make economic and political relations and agreements with the regime in Tehran contingent upon verifiable improvements in human rights and women’s rights. They stressed that Iran stands on the brink of change as the regime has no solutions to any of the economic and social crises facing it and that growing popular dissent in the country rejects the theocracy in its entirety and demands regime change.
The President-elect of the National Council of Resistance of Iran (NCRI), Maryam Rajavi, was the keynote speaker at the conference speaking alongside the panelists including several former ministers.

Baroness Eaton, Member of the UK House of Lords

Dear friends, my dear Iranian sisters, and Dear Mrs. Rajavi, it is always an honor to speak and to be part of your events that I have always appreciated. But it’s a double honor to speak on the occasion of International Women’s Day.

My colleague talked about the existence of 27 state agencies in Iran tasked to suppress women specifically, including compulsory veil. Has anyone ever asked why the clerical regime is so desperate to focus its attention on fighting women in every form and shape it can.

The Mullahs regime that’s since its inception, has executed 120,000 of the best and brightest people, including pregnant women has indeed, institutionalized gender discrimination, in law and in practice. Literally speaking, Iran is one of three to four countries that has taken no action in ratifying the convention of elimination of gender discrimination.

By realizing the misogynistic nature of this regime, women took leadership roles to not only fight for their own rights, but to liberate a nation from the darkness of a medieval regime that has rightfully, in my opinion, seen its end at the hands of women. Over the course of my engagement with NCRI, I met many women who have spent time in prison as political prisoners and have seen their relatives and best friends executed, and yet they have endured.

A prime example is Mrs. Rajavi herself. Her younger sister, eight months pregnant, was attacked by the murderous IRGC agents, and killed under torture.

I want to use this opportunity to recommend myself to the cause of freedom and equality in Iran. As I firmly believe, the regime in Iran is a clear and present danger to our security and to the Iranian people, and in particular, Iranian women. For me, the pain that the mother of Iranian wrestling champion, Naveed Ascari, who was executed by this regime just a few months ago and endured is unimaginable.

Naveed’s two brothers also are imprisoned. Can any one of you imagine that pain? How about the brave Reyhaneh Jabbar, who did not give in to the criminal agent who wanted to assault her and her grieving mother? How about the frail mother of Sattar Beheshti, a blogger killed under torture by the regime? And the list goes on. My heart goes out to all these suffering women, as mothers.

In conclusion, what is our role? What should we do? Is it enough just to talk about these atrocities, or as interested representatives of the people, we have a duty to act. These are my recommendations.

One, any relationship with the regime in Iran, if any, must be contingent upon very vulnerable human rights improvements, including women’s rights. As the main operator suppression inside Iran and exporter of terror abroad, the IRGC and as affiliated by sea force, must be prescribed in its entirety. And I’m confident we have a cross-party support for this endeavor.

And finally, we have to recognize that NCRI is our ally, because peace and stability in the volatile region of the Middle East can only be achieved and more importantly, maintained when malign activities of the Iranian regime stops; and that can only be achieved by supporting the Iranian people and NCRI for a tolerant non-nuclear and democratic republic in Iran. Thank you.