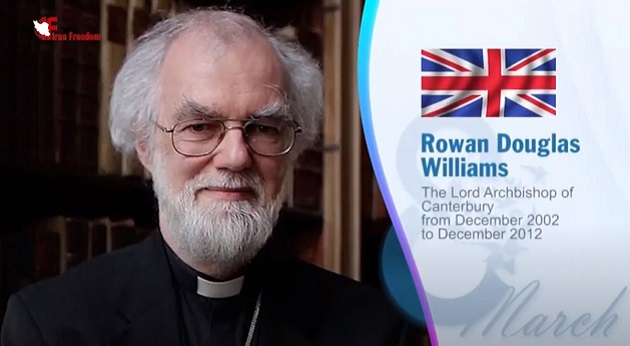 Archbishop Rowan Williams, former Archbishop of Canterbury addressed an online panel supporting women’s rights in Iran to mark International Women’s Day on March 8, 2021.
A panel of 30 Members of Parliament and women’s rights activists from the UK and Europe urged their governments to put human rights at the forefront of Iran policy during an online conference sponsored by the British Committee for Iran Freedom on International Women’s Day, March 8, 2021.
The cross-party speakers called on the UK and EU governments to work together to put pressure on the regime to release all political prisoners, prisoners of conscience, protesters, and dual citizens held under arbitrary charges in Iran, especially the women. Speakers urged the UK and EU to make economic and political relations and agreements with the regime in Tehran contingent upon verifiable improvements in human rights and women’s rights. They stressed that Iran stands on the brink of change as the regime has no solutions to any of the economic and social crises facing it and that growing popular dissent in the country rejects the theocracy in its entirety and demands regime change.
The President-elect of the National Council of Resistance of Iran (NCRI), Maryam Rajavi, was the keynote speaker at the conference speaking alongside the panelists including several former ministers.

It’s a very great pleasure and privilege to be able to address this meeting and to recognise the presence of Mrs Rajavi here with us. We are celebrating International Women’s Day and whenever we do this, we need to bear in mind the crucial role which the empowerment of women plays in the advancement of any society.

It’s a commonplace recognition now, that raising the status and recognising the skills of women is an essential part of driving forward a society that is more participatory and democratic but also one which is more effective in its education and its healthcare. That is why any regime, any society, in which women’s skills and capacities are systematically denied or oppressed is one that must cause great concern in the global community.

And we know that this is one of the great problems facing Iranian society under its present regime.

It is a very striking fact indeed, that women have been at the forefront of protest and resistance within Iran, especially within the last couple of years and of course beyond its borders in the … community. And the fact that women have played so prominent, and so transforming courageous a role in the politics of Iranian society in resistance to tyranny tells its story. It tells a story of repression and discontent, but also of confidence and hope.

And this event today is not simply about the history of repression but also about the renewal of hope. Hope for an Iranian future which will be good news for all its citizens. A future for the Iranian people in which women can play their full and proper part in developing a society that is sustainable and compassionate and just.

It’s important to say as we think of these things, that this discourse about the rights of women is not some kind of Western agenda, not some kind of foreign imposition on Iranian society. Concern about the rights and dignities of women comes from the deepest roots in that shared Jewish, Muslim and Christian civilization and religious perspective which has so transformed our world.

This is not a stalking horse for alien values. It is an expression of what is most deeply rooted in the values we share and care about. The values which will truly transform human possibilities. So, we are meeting in that hope; the hope of a future where a common vision shared by the great religious and cultural traditions of the region will come to flower.

In the confidence and the hope that that just, compassionate and democratic future, I send greetings for this event and assure you and the Iranian people of my continuing prayers and support for a just future. Thank you for the opportunity of sharing this event and speaking to you.

IAEA Head Says Iran Must Reveal All Past Nuclear Work