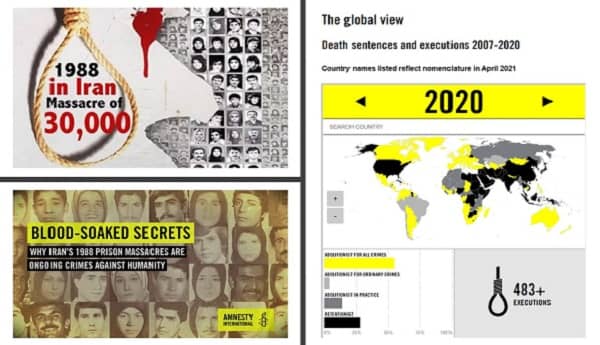 Amnesty International published its annual report on the inhumane death penalty in the world in 2020. This report is a reference to the executions announced by the governments.

Amnesty International published its annual report on the inhumane death penalty in the world in 2020. This report is a reference to the executions announced by the governments. The actual number is much higher than the announced statistics.

Amnesty International reports on executions in 2020, referring to the Iranian regime, which uses executions to suppress political dissidents and protesters.

“the country increasingly used the death penalty as a weapon of political repression against dissidents, protesters, and members of ethnic minority groups, in violation of international law.”

Ali Khamenei, the current supreme leader, was President and a key decision-maker at that time.

Khamenei and Ali-Akbar Hashemi Rafsanjani worked alongside Khomeini in initiating the massacre. Khomeini’s former heir Hossein-Ali Montazeri said in a letter that Khomeini sought counsel on his dangerous decisions from these two individuals alone.

A few months later Ali Khamenei, the then President of the Islamic Republic of Iran, had reportedly said at a meeting in Tehran University: “As regards the mass executions… those in prisons who had contacts with the Monafeqin [PMOI], who mounted an armed incursion against the Islamic Republic … are condemned to death and must be executed” (Tehran radio, 5 December 1988).

Also, Ebrahim Raisi, a member of the Death Commission at the time, is now the head of the regime’s judiciary.

Alireza Avaei, another perpetrator of the 1988 massacre, became Minister of Justice in Hassan Rouhani’s government.

So, it is time to investigate the 1988 massacre.