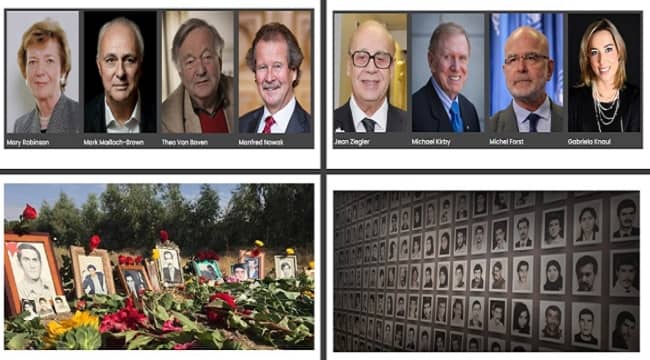 Justice For Victims Of 1988 Massacre In Iran (JVMI) issued a press release regarding the open letter of more than 150 former UN officials to the High Commissioner for Human Rights on the 1988 massacre of political prisoners in Iran.

The text of this statement is as follows:

More than 150 former United Nations officials and renowned international human rights and legal experts wrote to UN High Commissioner for Human Rights Michelle Bachelet on Monday, calling for an international Commission of Inquiry into the 1988 massacre of thousands of political prisoners in Iran.

Distinguished legal professionals signing the appeal include the former Chief Prosecutor of the UN International Criminal Tribunals for the former Yugoslavia and Rwanda, a former Special Prosecutor at the Special Tribunal for Lebanon, and the first President of the UN Special Court for Sierra Leone.

Altogether, 45 of the signatories have previously held UN-affiliated positions.

Other notable signatories include the former Archbishop of Canterbury Rowan Williams, former Canadian Prime Minister Kim Campbell and six Nobel Laureates, including 1996 Nobel Peace Prize winner and former President of Timor-Leste Jose Ramos-Horta.
The open letter was also signed by 24 international NGOs including Justice for the Victims of the 1988 Massacre in Iran (JVMI), International Center for Transitional Justice (ICTJ), World Organisation Against Torture (OMCT), and the Raoul Wallenberg Centre for Human Rights.

The open letter states that on 3 September 2020, seven UN Special Rapporteurs wrote to the Iranian authorities stating that the 1988 extrajudicial executions and forced disappearances of thousands of political prisoners “may amount to crimes against humanity.”
In 1988, Iran’s first Supreme Leader Ayatollah Khomeini issued a fatwa (religious decree), ordering the execution of all political prisoners affiliated to the opposition People’s Mojahedin (PMOI or MEK). Members of other groups were executed in a second wave.

“There is a systemic impunity enjoyed by those who ordered and carried out the extrajudicial executions”, the UN Special Rapporteurs said, adding: “Many of the officials involved continue to hold positions of power including in key judicial, prosecutorial and government bodies.” They include the current Judiciary Chief and Justice Minister.

“We appeal to the UN Human Rights Council to end the culture of impunity that exists in Iran by establishing a Commission of Inquiry into the 1988 mass extrajudicial executions and forced disappearances. We urge High Commissioner Michelle Bachelet to support the establishment of such a Commission,” the open letter states.

Former UN human rights official Tahar Boumedra says: “This marks the first time that such a distinguished array of former UN officials are appealing directly to High Commissioner Bachelet to hold the perpetrators of the 1988 massacre accountable. She can remedy the regrettable failure of the relevant UN bodies to investigate this horrific atrocity and hold those responsible in the years past and put an end to the ongoing torment of the victims’ families. They have a right to the truth and to justice through a UN-led investigation. The witnesses are still alive. The evidence is at hand. Justice delayed is justice denied. The failure to act now will only embolden the regime to continue its cover-up and evade accountability.”

Please contact the JVMI’s media team for interviews about the open letter: [email protected]
Justice for the Victims of the 1988 Massacre in Iran (JVMI)
5 May 2021

Click here to read the full text of the letter

Maryam Rajavi: The Ministry of Intelligence and the IRGC Should Be Included in EU’s Terrorist List