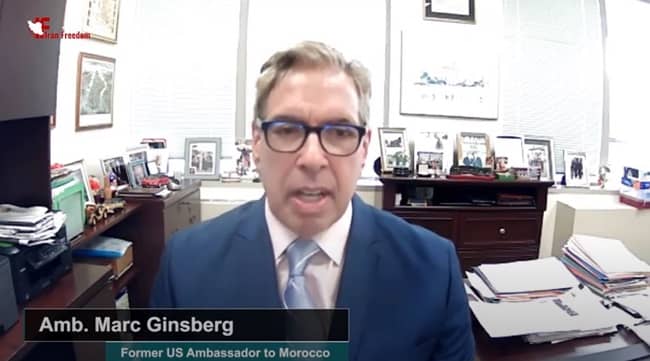 Marc Ginsberg, former US Ambassador to Morocco and White House Middle East adviser, addressed a panel of international dignitaries in an online conference, observing the holy month of Ramadan and declaring interfaith solidarity in the face of fundamentalism that has spread and promoted by the mullahs’ regime in Iran.

This should be a period of blessing and peace to people of all faiths. The Iranian regime carries out atrocities under the banner of Islam. And we all know this is not Islam. The mullahs do not practice peace. They practice war. They practice vengeance.

Those of us who have come to know Madam Rajavi, the MEK and NCRI know that her leadership is true Islamic leadership. Like all Abrahamic religions, the Islam that Madam Rajavi practices seeks to remove the shackles of human bondage.

It’s important for all of us to recognize the continuous dangers that the Tehran regime poses to the Middle East and across the globe. Despite all concessions made by Europe and the U.S. to this regime, the minute that the ink was dry on that agreement, the Ayatollahs were cheating on the commitments that they signed up for. They continue to engage in bomb making, launching ballistic missiles, and crack down on protesters.

Madam Rajavi represents the most viable and democratic alternative to this regime.

The Plight of Iran’s Workers