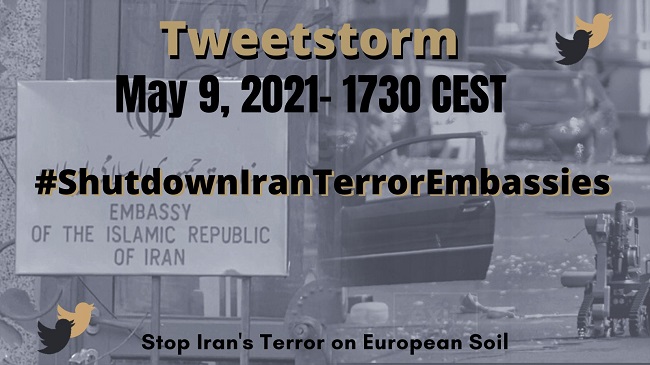 Terrorism exported under the cover of diplomacy cannot be tolerated - we want to end it.

Join tweetstorm to put an end to Iran’s terrorism; calling for shutdown of Iran’s Embassies

In a landmark decision, an Iranian regime official was tried for terrorism on European soil in February, being handed a 20-year sentence. On Wednesday, 5 May 2021, Diplomat-terrorist Assadollah Assadi’s lawyer dropped an appeal against the European verdict, effectively accepting his sentence.

Now, the EU and all members states must make a choice: turning a blind eye on Tehran’s use of diplomatic privileges to conduct terrorism in Europe under various pretext; or to abandon the shameful silence and take robust punitive action.

In a confidential interview leaked to the press, Iran’s FM Javad Zarif, acknowledged that since 1979, the policies executed by the regime’s Foreign Ministry were “security-centered,” serving as a component in justifying the regime’s foreign meddling and export of terrorism. Particularly acknowledging being a puppet of the mullahs’ terrorist Quds Force and serving Qassem Soleimani. Adding that “most Ambassadors” and the entire “structure of the foreign ministry” are driven by fundamental security challenges for the regime. In other words, indicating that Iran’s embassies serve as a nest for espionage and terrorism abroad.

It is in our hands to stop the Iranian regime’s terrorism.

Nationwide Rallies By Retirees And Students Despite Repressive Measures Across Iran