Nationwide Rallies By Retirees And Students Despite Repressive Measures Across Iran 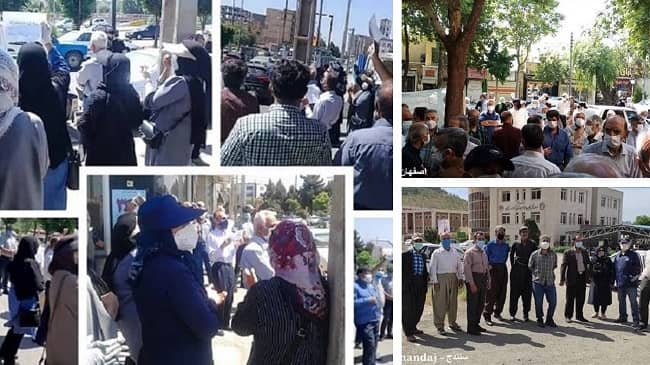 Iran: Nationwide Rallies By Retirees And Students Despite Repressive Measures

“We will not vote anymore, we’ve heard too many lies; Down with Rouhani; free imprisoned workers “

The Secretariat of the National Council of Resistance of Iran (NCRI) issued a statement on Sunday (May 9th) regarding nationwide protests by retirees and students across the country.

The text of the statement is as follows:

Despite the clerical regime’s repressive measures, on Sunday, May 9, 2021, retirees and social security pensioners in Tehran and 12 other cities took to the streets again protesting against the unbearable living conditions and the below-poverty line salaries. In Tehran, repressive forces and plainclothes agents gathered in front of the Social Security Organization to prevent the formation of the retirees’ protest rally.

They chanted: “Only by taking to the streets, we can get our rights,” “Our salary is in rials, while our expenses are in dollars,” “Social Security, the name does not match the doings,” “Retirees stand up against oppression”, “We are facing the Coronavirus crisis, and discrimination and nobody (the regime) cares about us,” “We will not vote anymore, we have heard too many lies,” “Down with Rouhani,” and ” Imprisoned workers must be released.”

At the same time, for several consecutive days running, students gathered in front of the Education Departments in Bandar Abbas, Tabriz, Kerman, Mashhad, Qom, and Karaj, protesting against in-person exams, which would lead to spreading COVID-19 among students and their families. They chanted, “We do not want the in-person exams,” The repressive State Security Force and plainclothes agents attempted to stop these gatherings and to prevent the news of the gatherings from spreading. They confiscated the mobile phone of those who were filming. Several students were arrested in Mashhad.

Also, regarding the protests of retirees and students across the country, Mrs. Maryam Rajavi the president-elect of the National Council of Resistance of Iran (NCRI) said:”I salute the retirees and pensioners, the students and teachers, and the workers who held protests in cities across Iran. I call on my compatriots and freedom-loving youths to support their just demands.”