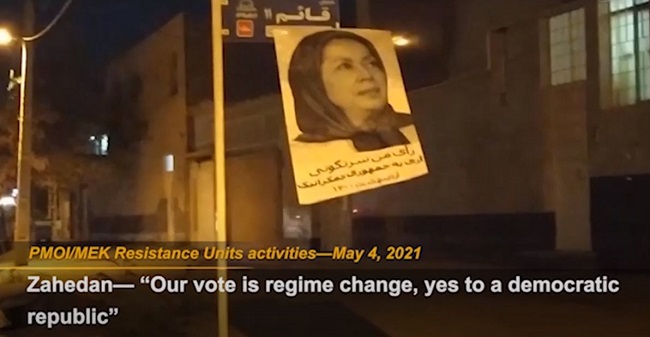 As the Iranian regime prepares for its sham presidential election, the network of the Iranian opposition continued its campaign across the country, calling for the boycott of this masquerade that only serves to justify the tyrannical rule of the mullahs.

The People’s Mojahedin Organization of Iran (PMOI/MEK) network, known as the Resistance Units, spread anti-regime slogans in almost all provinces.

These slogans were spread on various city walls and public places and were widely welcomed by the public. The Resistance Units also installed posters of the Iranian Resistance leader Massoud Rajavi and the President-elect of the National Council of Resistance of Iran (NCRI) Maryam Rajavi with the slogans:

“A strong no to the religious dictatorship, yes to a democratic republic,”
“Down with Khamenei, hail to Rajavi” and “Iranian people’s vote is regime change.”

This is while the regime punishes any support for the MEK with heavy sentences.

Elimination of Larijani or Shooting Khamenei Himself?!