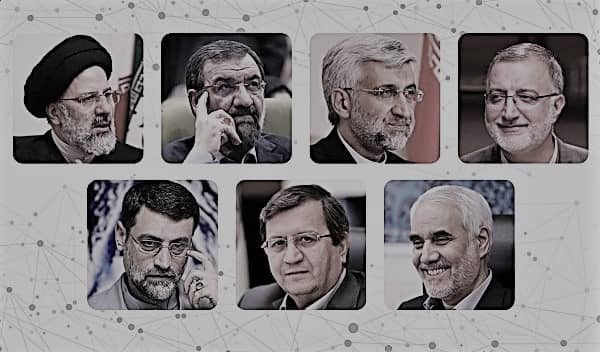 The qualified candidates in Iran's sham elections by Guardian Council

The Iranian interior ministry announced on May 25, the seven officials that the Guardian Council have approved to run for president in next month’s election, including:

These presidential elections are held every four years, but they are not a democratic process. They are a façade of democracy designed to trick the world into thinking that the regime is beloved by the people. Otherwise, the Guardian Committee, made up of 12 people appointed directly or indirectly by the Supreme Leader, would not disqualify candidates like former parliament speaker Ali Larijani, current, and former president Mahmoud Ahmadinejad.

The removal of these candidates has all but ensured that Raisi, who is known most for his role in the 1988 massacre of 30,000 political prisoners, will be the next president. The massacre was ordered by then-supreme leader Ruhollah Khomeini and killed thousands in just a few weeks after show trials where prisoners were sent to the gallows if they didn’t rebuke the Resistance.

Maryam Rajavi, the President-elect of the National Council of Resistance of Iran (NCRI), said that Khamenei is consolidating power and increasing repression through the purge of the so-called reformist candidates, suggesting that this shows that the regime fears overthrow, which is the next logical step.

She said: “Disqualifying individuals such as IRGC Brig. Gen. Ali Larijani, the architect of censorship and repression, the speaker of the regime’s parliament for 12 years, and always a part of Khamenei’s inner circle, will render the regime’s power base narrower and more fragile, unprecedently aggravate the regime’s infighting, and in turn, accelerate the process of implosion and overthrow of the regime.”

The regime wants Raisi as president so that he can help them repress the protests that they all know are coming, just like the 2017 and 2019 uprisings. They are scared that the people will revolt and officials feel that they need a strongman in charge to protect them from the people’s anger.

However, the people plan to boycott the election, causing a low voter turnout and, essentially, casting their vote for regime change, and showing how the mullahs are illegitimate.

The Resistance wrote: “Now that the regime has shown its true colors, it is time for the international community to recognize the regime for what it is, a gang of mass murderers and terrorist that are waging war against the world and their own people.”

Iran Media Admits the Election Boycott Will Harm the Regime