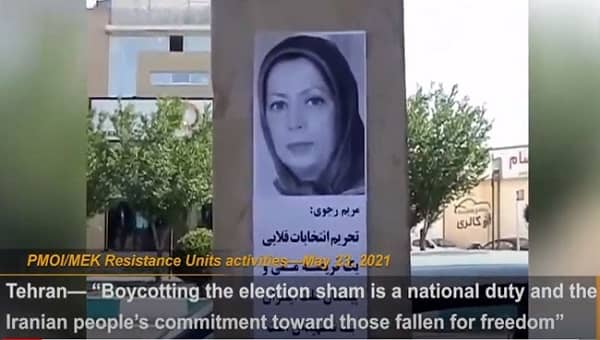 The Iranian Resistance and the people have continued their campaign calling for a nationwide boycott of the presidential elections this June, despite the regime’s increased repression of any type of protest.

In the bigger cities, like Tehran and Mashhad, the Resistance Units put up posters of the Iranian Resistance leaders Massoud and Maryam Rajavi, with the slogans “A strong no to the religious dictatorship, yes to a democratic republic” and “Iranian people’s vote is regime change”.

They are doing this even though supporting the MEK is a criminal offense in Iran, one that could cost you your life. For example, political prisoner Mehran Gharabaghi, 29,  was recently sentenced to death and his family were told that they should pressure him to collaborate with the Intelligence Service and denounce the MEK.

The regime is increasing pressure on dissidents because they want to create a repressive atmosphere to limit protests ahead of the elections, hoping to encourage a higher voter turnout. Of course, the mullahs are no strangers to cracking down on protesters; having slaughtered thousands of dissidents in the violent crackdowns on the three anti-regime protests that have taken place since the last presidential election.

The MEK also this week commemorated their executed founders Mohammad Hanifnejad, Saeid Mohsen, and  Ali Asghar Badizadegan, who were killed by the Shah’s dictatorship on May 25, 1972.

The Shah’s secret police, SAVAK, arrested 80% of the MEK’s membership, including all of the leaders, in 1971. This shows just how popular the MEK were among the Iranian people, otherwise, the Shah would not have arrested them. The MEK leaders defied the regime in court and exposed its corruption, increasing its popularity amongst the people.

SAVAK asked them to repent their MEK membership in exchange for their lives, but they refused to do this, making the ultimate sacrifice to fight for freedom. They are heroes and will be remembered as such.

Iran Media Admits the Election Boycott Will Harm the Regime