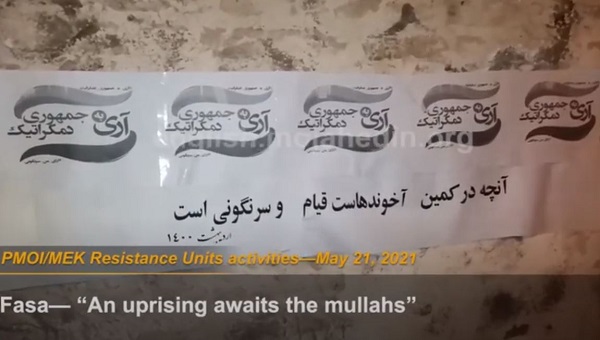 MEK Resistance Units Activities inside Iranian Cities in May 2021

During the month of May, over 310 areas in all of Iran’s provinces witnessed activities calling for a boycott of the regime’s sham presidential elections in June. These are activities of the Iranian Resistance Units, the internal network of the Iranian opposition, the People’s Mojahedin Organization of Iran (PMOI/MEK).

This campaign primarily began in late March 2021, following the Iranian Resistance’s call to boycott the mullahs’ farce elections. In April, The Resistance Units, carried out anti-regime activities in over 250 places in 27 provinces.

The call for a boycott very quickly turned into a nationwide effort and a widespread social movement in Iran. In recent weeks, various sectors of society have called for a nationwide boycott and chanted “We’ve heard so many lies that we won’t vote anymore.” “A strong no to the religious dictatorship,” “Our vote is regime change and boycott of the sham elections,” and “Down with Khamenei”.

These activities were welcomed by the public and were a boost of inspiration for millions of Iranians who demand change.
Also, in major cities such as Tehran, Shiraz, Isfahan, and Mashhad, MEK supporters installed slogans in support of Maryam Rajavi, the President-elect of the National Council of Resistance of Iran (NCRI).

This is while supporting the MEK is considered as “enmity against God” and is punished severely.
The Resistance Units risk being arrested, imprisoned, and tortured while carrying out these activities that aim to break the atmosphere of fear imposed by the mullahs and give heart to millions of outraged people who demand regime change.

Referring to these activities, the State-run media reflects the regime’ fear of the widespread boycott of the presidential election. The state-run Resalat daily on May 20 underlined that “The current situation targets the system’s security and fuels calls for regime change.” Therefore, the brave campaigns of the MEK’s network inside Iran express the Iranian people’s long desire for regime change, freedom and democracy.