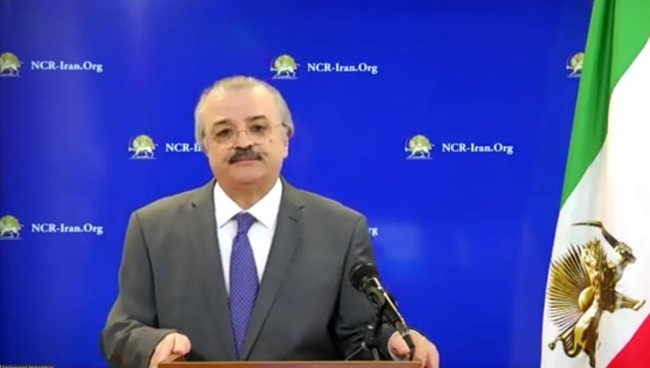 The chair of the National Council of Resistance of Iran’s (NCRI) Foreign Affairs Committee, Mohammad Mohaddesin

There may officially be seven candidates running in the Iranian presidential election this month, but the truth is that the outcome is already set in stone, according to a leading member of the Iranian Resistance. The chair of the National Council of Resistance of Iran’s (NCRI) Foreign Affairs Committee, Mohammad Mohaddessin, gave a press conference last week, in which he said that the election was a “one-man-show”.

After all, the only real candidate left is Judiciary Chief Ebrahim Raisi, who is the favored candidate of Supreme Leader Ali Khamenei, who in turn is trying to consolidate power.

At the same time, Mohaddessin explained how the regime is in a vulnerable situation right now and is facing a nationwide boycott at the polls, thanks to a brave campaign by the People’s Mojahedin Organization of Iran’s (PMOI/MEK) and its Resistance Units over the past few weeks.

Their anti-regime activities, including putting up posters of Resistance Leaders Massaoud and Maryam Rajavi and graffitiing walls with slogans condemning the regime, have encouraged people protesting on other matters to support the boycott with the chant “We have seen no justice; we will not vote anymore”.

This boycott is predicted to be much bigger than ever seen before, including the February 2020 parliamentary elections, which saw a pitiful turnout even though the regime had covered up the coronavirus hitting their country to encourage more people to come out to the polls.

The NCRI and MEK have long advised that Iranians boycott elections so that the rest of the world understand that the regime has no legitimacy amongst the Iranian people. This will justify the need for sanctions against the regime, which will allow the people to take control of their country.

The people showed their support for this stance before, in the uprisings of 2018, 2019, and 2020, saying that the “game” was over for both factions of the regime; not that there is a lot of difference between them.

Mohaddessin listed the NCRI’s recommendations for the West once Raisi, best known for sentencing thousands to death in the 1988 massacre of political prisoners, becomes president. These were: