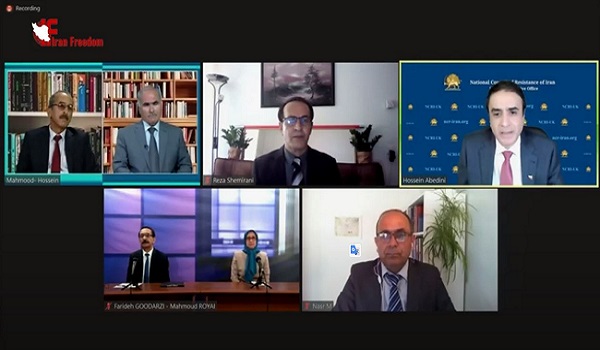 On Tuesday, June 8, 2021, some former Iranian political prisoners, members, and supporters of the People’s Mojahedin Organization of Iran (PMOI/MEK), attended an online conference held by the foreign affairs committee of the National Council of Resistance of Iran (NCRI), shedding light on the criminal record of the candidates of Iran’s sham presidential election, particularly Ebrahim Raisi.

Mr. Hossain Abedini, the NCRI’s Representative Office deputy director in the UK, moderated this conference.
The former political prisoners had personally witnessed or were the victims of the 1988 massacre of political prisoners in Iran. The primary candidate for the regime’s sham Presidential election is Ebrahim Raisi, Iran’s current Judiciary Chief, a member of the death commission. Raisi played a crucial role in the massacre of over 30,000 political prisoners, mostly members and supporters of the People’s Mojahedin Organization of Iran (PMOI/MEK).
In his opening remarks, Mr. Abedini referred to the intention of the regime’s Supreme Leader, Ali Khamenei, to consolidate his power by pulling Raisi out of the ballot box.

After Mr. Abedini’s remarks, the participants in the conference spoke about their own personal observations and the execution of the Iranian political prisoners by Ebrahim Reisi.

The full video of the conference, including speeches by the moderator and participants, is as follows:

Iranians To Renew Call for Western Support Ahead of Presidential Transition