On Friday, September 14th, on the occasion of the 30th anniversary of this massacre, a commemorative meeting was held with the participation of a number of human rights activists at the United Nations Headquarters in Geneva.

The speakers were Ms. Ingrid Betancourt, Gilbert Mitrán, Taher Boumedra, Lawrence Reil (member of the Swiss Federal Parliament), Dr. Vidal Coadras, the prominent Juan Garseau lawyer, and Mrs. Elizabeth Zamparotti, the secretary of ‘Hands off Cane’.
Part of the speeches of the participants in the Geneva meeting: 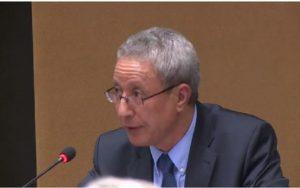 Taher Boumedra: The Iran regime will never form an investigation into the 1988 Massacre and they are destroying the evidence.

I advise all special rapporteurs and UN officials to call for independent investigation into the 1988 Massacre.

We commemorate Asma Jahangir, previous Special Rapporteur on Iran who first addressed the 1988 Massacre and we hope that Mr. Javid Rahman will follow her path. 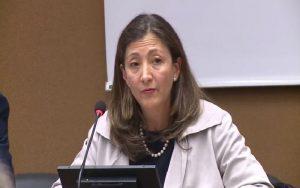 Ingrid Betancourt: at UNHRC39 in Geneva on 1988 Massacre in Iran: The regime of mullahs denies this massacre but the facts show otherwise. Prisoners at the time had served their sentences but they were executed anyway.

Khomeini’s fatwa ordered the execution of all political prisoners in Iran who were considered either “Mohareb” (those who wage war against God) or “Mortads” (Apostates) in 1988 Massacre.

Ingrid Betancourt: This is important because we are facing prisoners who had been sentenced, serving their terms, some had finished or were about to be released, who were executed in 1988 Massacre.

In 1988, in Iran prisons, prisoners were divided, beginning in July. Prisoners would face the death commission which wouldn’t ask about charges but asked about their beliefs if they renounce their affiliation to the opposition. And were executed based on it.

Executions were carried out in mass. Hundreds were executed each day. Imagine in 5 months 30.000 people were executed, men and women. 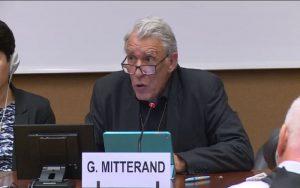 Mr. Gilbert Mitterrand: How many such sessions should we still have to hold? This is once again an expression of our denunciation of the injustice.

We can really see that the Iranian people are rising up in many cities that are being violently put down by the mullahs.

Things are starting to move as Iran is going under economic pressures. 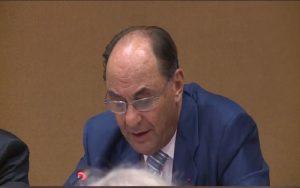 Vidal Quadras: Remembering the 30th anniversary of the political prisoners in Iran, the late Mrs. Asma Jahangir. She mentioned the name of PMOI as the victims of the massacre for the first time in her report.

Many perpetrators have actually admitted to committing the crime. Some have actually said they are proud of having participated in the massacres.

Two years ago, we published a report about audio tape by the son of late Ayatollah Montazeri. Listening to this tape you will grasp the frightening senses.

During the presidency of the so-called moderate Hassan Rouhani, over 3000 have been executed.

The Iran regime has also responded brutally to the nationwide uprising since December. More than 50 shot in streets more died under torture in prisons.

We in Europe should side with the people of Iran. Europe’s struggle in the preservation of the nuclear agreement is a disgrace.

Contrary to what Europe thinks, this is a regime that doesn’t have a future. There are no moderates in Iran regime.

The future belongs to democracy. It is essential that UNSC refers this case to international court. We look forward to the more active role of the United Nations in the inquiry regarding the 1988 Massacre. 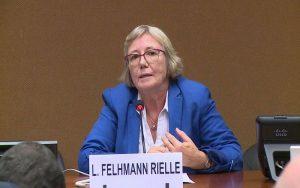 Ms. Felhmann Rielle: The perpetrators of the crimes have never been brought to justice and on the contrary, some of them are still in power in high positions in Iran.
More than a third of those executed were women. There were women over 70. And there were also pregnant wome
This massacre is one of the most atrocious crimes that Iran has ever experienced. And it has really slipped out of the screening of the international community.
In audio recordings release lately of officials and religious dignitaries at the time, you can hear the leader ordering the execution of these political opponents.
The victims’ families have the right to know the truth about these events and the fate of their loved ones. There should be effective investigations.
The situation of the political prisoners in Iran continues to be extremely worrying. And, we are seeing very regular executions. 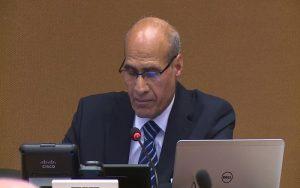 Sanabragh Zahedi: 1988 massacre was one of the worst crimes against humanity.
Amnesty released two reports this year about Iranian regime destroying evidence of the 1988 Massacre by bulldozing the burial sites.
Iran still executes the most number of people per capita in the world.we need an international commission for inquiry because the Iran regime will never agree to investigate itself on 1988 Massacre. 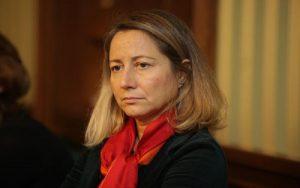 Ms. Elizabeta Zamparutti of the Italian Radical non-violent party and the human rights organization, Hands off Cain, intervenes at the side event of UNHR: The Iranian people paid a high price in 1988 Massacre and it continues with a large number of current executions in Iran.

About political prisoners in Iran