Theresa Villiers, a Member of Parliament from the United Kingdom’s Conservative Party, has announced her support for “freedom for Iran.” Speaking at the Free Iran rally in Paris on July 1, Ms. Villiers pointed to the “shocking human rights record of the Iranian regime,” which she described as a “tyranny.”

“Nearly 700 people were put to death in a single six month period in 2015. That’s equivalent to around three every single day of the year.

And sadly, we all know that the Iranian regime leads the world in the execution of children. It’s believed that at least 73 juvenile offenders were executed over the ten years between 2005 and 2015,” she said.

“This regime is a deeply repressive one which brutalizes much of its population. And its pursuit of dominance in the region is a continuing source of instability in the Middle East. It is the world’s leading state sponsor of terrorism, providing financial and material support to a range of lethal, violent, extremist, terrorist groups. So the Iranian regime is responsible for many lives lost and families bereaved both within its own borders and beyond.”

The Iranian regime, she said, is “truly a source of evil in the world.”

“I sincerely hope that one day the people of Iran will be able to free themselves from its grip and together build a brighter future based on the principles of freedom of democracy. And I believe that Mrs. Rajavi and the National Council of Resistance of Iran will be at the forefront of that long road to freedom.

“I’m here with my colleagues from across different parties in Great Britain to pay tribute to Mrs. Rajavi and to pay tribute to her for the lead she sets promoting justice for the Iranian people and a peaceful and democratic future for Iran. Mrs. Rajavi, I believe your brave campaign for free Iran and justice in Iran isajust cause and you have our support,” she added. 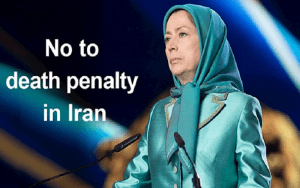 Tens of thousands of supporters of the NCRI and the People’s Mojahedin Organization of Iran (PMOI or MEK) took part in the Free Iran rally.