alternative whit  a vast network of supporters for free Iran moderation is a false notion in the current regime ., Rudy Giuliani former mayor of New York City spoke at the “Free Iran” rally on Saturday 1st July in Villepinte, France. He said it was an honor to join the Resistance once again and gave some encouraging words of praise to all those involved in the movement including the 120,000 martyrs and the leader Madame Maryam Rajavi who has been there through the good, difficult and horrible times.

He spoke about the Camp Ashraf residents who are now safely located in Albania and thanked everyone who was involved in the transfer including senator Torricelli, Judge Mukasey, Louis Freeh, and the many others. “And we want to thank the Albanian government, and we want to thank the Albanian people for their humanity, for their big heart, and for their decency. I wish my country had stepped up and done that, and I am in great awe and respect for what they did.”

Giuliani said that the new administration in Washington brings hope for the Resistance because President Trump has “a different set of principles and a different way of looking at the world”. He believes that Trump will be able to free the Iranian people from the oppression they have suffered under for many years. He highlighted that in Saudi Arabia Trump was “laser focused on the danger of Iran” to the region and the rest of the world. “Unlike prior administrations, he’s not in a state of denial. He understands how it would be extraordinarily dangerous for the world to have a nuclear Iran. He realizes how dangerous for the world it is to have an ayatollah who is a theocratic dictator and a mad man. And he also realizes as we do that the only way we’re going to have stability in the Middle East and stability in the world is exactly the theme of your conference, a free Iran, built on the principles and a good alternative  that we all share.”

He said that already “we can kind of see an end” to the overthrow of the regime. He said that like the Soviet Union, although no one could say when it would fall, it will. He said he is certain it will happen in his lifetime. 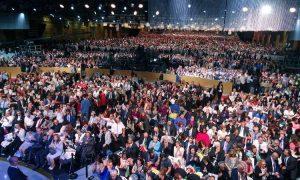 Mentioning the practical side of the overthrow of the regime, he said that with the overthrow of the Mubarak and Qhadafi governments no one knew what they would be replaced with. However, for Iran an alternative already exists –a democratic alternative whit  a vast network of supporters.He ended his speech with some positivity: “But I’m happiest to be here because finally, finally I can say, and I can probably say this with a good deal of authority, that the government of the United States supports you, we’re behind you, we agree with your values. The government of the United States understands the danger of Iran. The government of the United States will not allow Iran to become an empire in the Middle East. And the United States of America will not allow Iran to become a nuclear power under any circumstances. This is the first time I could stand here, this is the first time I could stand here and feel proud of my government. Every other time I stood here I was embarrassed for the cowardice, for the denial, for the unwillingness to see Iran for what it was. And finally, I can stand here and say you, I, my government and your leadership, we see Iran in exactly the same way. The regime is evil and it must go. Free Iran.”