alternative’s rally :next year ,could be held in Tehran- A former US lawmaker addressed the Free Iran gathering in Paris this weekend to speak up for freedom in Iran and talk about the international community’s shift away from the mullahs and towards the resistance.Joseph Lieberman, former US Senator and Democratic Vice Presidential candidate, shared with the over 100,000 people gathered his dream for peace in the middle east and how the first step must be ousting the terrorist Regime from Iran.

He said: “I have a dream, paraphrasing Dr. King, that all of the people of [the Middle East], Muslims, Christians and Jews, Shias and Sunnis, Israelis and Palestinians, will sit down together at the table of brotherhood and sisterhood and peace and freedom…. And I will tell you, the most significant step forward in realising that dream will be to change the regime in Iran and bring freedom to the people of Iran. It can’t happen with this regime.”

Lieberman praised the Trump administration for its approach towards Iran.

He said: “Going from the Obama administration to the Trump administration is going from an administration that was centered on somehow improving our relations with Iran at the high cost of ignoring the reality of the evil of this regime, to an administration where early on the new president, Trump, has said that the number one enemy the United States has in the Middle East is the regime that currently controls Iran. That’s a big difference.”

Lieberman also praised the US allies in the Middle East who have stood up to the Iranian Regime.

He said: “The Arab nations are energised under the leadership of King Salman and Crown Prince Bin-Salman. They’re more active diplomatically and militarily as part of a resistance against the regime in Iran than we’ve ever seen before. And of course for a long time the state of Israel, because it’s very existence is threatened by the regime in Iran has wanted to help change that regime.”

He said that this growing coalition with the Iranian Resistance forces, including the People’s Mojahedin Organization of Iran (MEK), gave him hope that the Regime could be quickly overthrown.

He said: “So you have come together now a mighty coalition of forces: America, the Arab world and Israel joining with the resistance. And that should give us hope that we can make this change.”

He noted that the one constant over this year of dramatic change has been the Iranian Regime and it’s horrific attitudes towards human rights and terrorism.

He said: “I know President Obama felt that if we negotiated the nuclear agreement with Iran that they would become more moderate. They haven’t. Their aggression continues throughout the region. Their support of terrorism which has killed so many, including many Americans, continues. Their repression of the human rights of the people of Iran continues. You know, a while back Baghdadi, the leader of ISIS declared a caliphate of Islamic extremism in the Middle East and said its capital was in Raqqa, Syria. As you know, ISIS is now being pushed out of that capital, thank God. But Raqqa was never the capital of Islamic extremism and terrorism. The capital, since 1979, of Islamic extremism and terrorism has been in Tehran under this extremist regime, and that is why it’s got to go.”

Liberman then spoke of the alternative and their fight for the freedom of the Iranian people, comparing them to the revolutionary fighters who first brought freedom and democracy to the US and France. He promised that their freedom is coming and prayed that the rally could be held in France as early as next year. 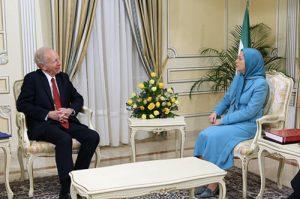 He said: “Some things have changed inside Iran, and that’s at the level of the people. You can never suppress a people, you can never enslave a people forever. The people of Iran inside Iran have shown the courage to rise up… To just talk about that, to just talk about that, to hold Madame Rajavi’s picture up in public places, is a sign of the unrest of the people and the growing confidence of the people that change is near. The same is true of the remarkable public disagreements between the various leaders of the country…It is time for America and hopefully some of our allies in Europe to give whatever support we can to those who are fighting for freedom within Iran.”

Lieberman also told the crowds on Saturday that he had never addressed a crowd this large, even when he was running for Vice President.