Top Tv Channel, 01/07/2017– During an important meeting of the Iranian opposition in Paris, the US Deputy State Secretary for Armament Matters, John Bolton, held a speech in front of thousands of people gathered for the ceremony and said that the regime of Ayatolah will not be able celebrate its 40th anniversary in power, but will be brought down within 2019.
Dozens of delegations from around the world were present in this event, including Saudi Arabia,

“The Iranian people and Iranian opposition are the first victims of Khomeini’s dictatorship,” said Turki Faisal, former Saudi ambassador in the United States and United Kingdom. “Your effort in challenging this regime is legitimate and your resistance for the liberation of the Iranian people of all ethnicities, including Arabs, Kurds, Baluchis, Turks and Fars of the mullahs’ evil, as Mrs. Rajavi said, is a legitimate struggle.

which has opposed the USA-Iran agreement of the Obama administration.

Albania was also present in this meeting, with a delegation led by Pandeli Majko 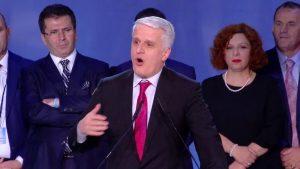 This year’s meeting in Paris was called “Free Iran” by the organizers, held for the Iranian opposition dissidents living in the West.

Dozens of thousands of people gather each year to express their support, attracting attention from Western media, since the meeting has the presence of noted personalities, such as Rudy Gulliani, Howard Dean, John Bolton, Newt Gingrich, Tom Ridge, etc.

The Iranian opposition diaspora demands a change of regime, while western policies towards Iran have been softer for the past four decades, in order to guarantee economic benefits. 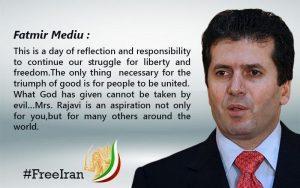 However, the Ayatollah’s are not affected by the economic relations, and their regime is still ruling the people.

In 1988, after the Iraq-Iran war, a religious decree issued by Ayatollah Ruhollah Khomeini appealed for execution of every supporter of MEK movement, an order which caused more than 30.000 political prisoners in Iran..