Since three weeks ago the Haft Tapeh Sugar Cane Mill’s hard-working workers gathered in front of the governorate office in Shush south of Iran.

Youths, students and workers’ families participated extensively in the demonstrations. Women played a significant role at the forefront.

On Saturday, November 17, 2018 a massive demonstration took place in spite of repressive measures and the creation of a climate of fear and terror, including the presence of scores of the special anti-riot and other repressive forces in the police station, governorate and the city.but when the workers did not stop the strike, the suppressive forces arrested and detained some of them. 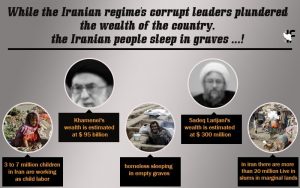 At the November 6 demonstration, the protesters chanted:“We are workers of the Haft Tapeh, we are hungry, hungry”, “Down with the oppressor, hail to the worker”, “Worker dies but does not accept humiliation”, “One less embezzlement, our problem will be solved!”, “The betrayal of the authorities must be disclosed”, “We do not want deceptive ”, “Government, embezzler, happy marriage!”

“We are children of Haft Tapeh, we are hungry”, “Dad gave water, dad gave bread, is no longer our slogan; but dad gave his life”, “We do not want false promises, we want our rights.”

Mrs. Maryam Rajavi, the president-elect of the National Council of Resistance of Iran (NCRI) saluted the striking workers of the Haft Tapeh Sugar Cane factory and Ahvaz National Steel Group and said:

“Shush has risen with the cries of workers, and solidarity and strike of youth, teachers and merchants of the bazaar. The enemy attempts in vain to silence the Haft Tapeh deprived workers by suppressing and arresting them, but the cry of “we are hungry, hungry” of the children of Shush, calls the conscience of every human being to rise up against the oppressor mullahs…

The enemy tries in vain to silence the voice of the deprived workers of Haft Tappeh through arrests and suppression. The cries of “we are hungry” of the children of Shush awaken the conscience of every human being, provoking them to rise up against the oppressive mullahs. #Iran pic.twitter.com/PVom5G4KX3

Mrs. Maryam Rajavi, the president-elect of the Iranian resistance also hailed the determination of the oppressed hard-working workers of Haft Tapeh sugar cane factory and Ahvaz National Steel Group, and other strikers across the country, and called on fellow citizens, especially the youths, to support them and said:

“Poverty, inflation, unemployment and corruption were brought to our country by the religious fascism, and will continue as long as this medieval regime is in power.”

Formerly Mrs. Rajavi had addressed the truckers and marketers on strike in her messages as:

“For as long as the criminal and corrupt mullahs are in power, high prices, recession and poverty and the path to environmental destruction will continue; the only solution to this national crisis is the establishment of democracy and popular rule.”

Maryam Rajavi has described the nationwide strike by bazaar merchants and truck drivers as a part of the people’s uprising with the goal of overthrowing the regime and establishing freedom and social justice.

She had said under the mullahs’ regime, the wealth of Iran‘s people, which should be spent on economic improvements and people’s prosperity, is wasted on suppression and export of terrorism and external wars and is stolen by the ruling mullahs.

The movement of the Haft Tapeh workers and their achievements, regardless of any gimmicks represented by the regime, to confront it is registered in the record of the national uprising of the Iranian people and the history of the rightful movements of our homeland’s workers.

The uprising of Haft Tapeh workers has succeeded in bringing many similar demands to confront privatization in other areas up front. The demands that have been hiding under the ashes of oppression and disappointment.

Now, by following this example students and even hospital staff are protesting the privatization of education and medical treatment.

In the next step, these demands are immediately upgraded to a higher and more fundamental change.

And in this way, the guild related demands will lead to the most political demands, just as the demonstrations in December 2017 and summer of 2018 quickly became political and targeted the head of the mullahs’ regime.