The relatives of the political prisoners massacred in 1988, in Iran, share their experiences

The 30th anniversary of the massacre of 30,000 political prisoners in Iran by Khomeini’s fatwa, was held calling for justice for the victims of the 1988 massacre. This is the most important political demands of the Iranian people from the mullahs’ regime. Ending the international silence on the massacre and holding accountable the perpetrators and masterminds of the crime is the least demand by the families of the victims.

The martyr’s relatives share their experie nces with the attendees at the conference. 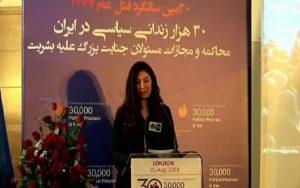 Naghmeh Rajabi, “Two of my aunts were executed by the mullahs’ regime. My first aunt, Afsaneh Rajabi, was arrested and tortured at the age of 22 by the clerical regime. She was executed. My other aunt, Zahra Rajabi, defended the rights of refugees from Iran.” 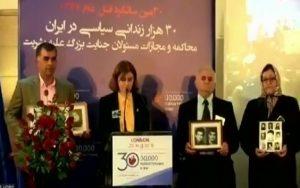 Farzaneh Majidi, the representative of the families of victims of 1988 massacre, was another speaker, “I am one of the victims of the ruling regime in Iran. I have lost five members of my family under the mullahs’ rule.”

She added, “Two of my aunts were executed in the 1988 massacre. My aunt, Mehrangiz, 23, and another aunt was only 17 who received 10 years’ prison sentence, but they did not let her finish her sentence and was executed in 1988 massacre.”

He emphasized, “We actively support the youngsters in Iran and we are devoted to supporting their resistance units. We support Maryam Rajavi’s Ten-Point Plan and believe the NCRI is the only viable democratic alternative to the clerical regime.” 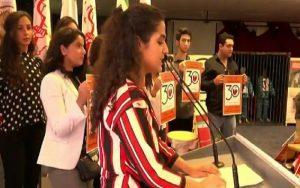 Raha Heshmatikhah, spokeswoman for Iranian Youth Association in the Netherlands was the next speaker. “I was born in the Netherlands and I have not seen Iran. My mother was a student when she was imprisoned for three years by the Khomeini regime,” she said, “I became acquainted with the PMOI through the human rights activities of my mother. I decided to support them. I am not alone, and I am accompanied by many young men and women here.” She added.

Ms. Heshmatikhah pointed to the political prisoners’ massacre and stated, “30 years ago, in 1988, 30,000 young Iranians many of whom were younger than me, were executed in mass executions. Families do not of their places of burial. There has been no independent investigation into this crime against humanity,” she continued, “The efforts of the Iranian Resistance under Maryam Rajavi’s leadership encouraged international organizations such as Amnesty International to follow up on this issue”.

“We urge the international organizations to condemn the 1988 massacre,” she demanded.