Iran people’s liberty overcomes the darkness of tyranny Tom Ridge, Former United States Secretary of Homeland Security, spoke at the “Free Iran” rally held in Villepinte near Paris. He said that just before he took to the stage he was reminded as to why the event was taking place. He said that he had been speaking to a woman who has lost six members of her family.

He said that the “light of liberty can overcome and replace the darkness of the tyrannical Iranian regime”.

Ridge alluded to Simin Behbahani, the human rights advocate and poet, who said: “My country, I will build you again, if need be with bricks from my life. I will build columns to support your roof, if need be with my bones. I will inhale again the perfume of flowers favored by your youth. I will wash away the blood off your body with torrents of my tears. And once more the darkness will leave the house.”

The former Secretary of Homeland Security reminded the audience that he has been working with the Iranian people’s Resistance for almost ten years and is still humbled by the passion, courage, sacrifice and dedication which reminds him of the US Declaration of Independence of his own country which enshrines a universal truth and universal rights. He emphasized that the rights are not given by the government or by man, “but by divine law, by human law, by natural law 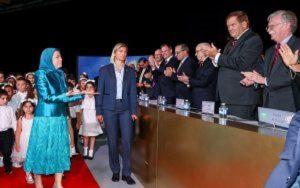 . He reminded the audience that everyone is created equal and has “certain inalienable rights that among them are life, liberty, and pursuit of happiness.” He said that these universal truths and rights are the aspirations of the Iranian people.

He said it was wrong that the people of Iran have been “rejected, denied, and crushed by the repressive Iranian regime.” Now, he said, is the time for the subordination of the Iranian people to end.

Ridge praised the Resistance, emphasizing that it is the only popular organization that has a proven leadership that can provide a democratic alternative to the mullahs’ regime.