The exposure of Iran-related terrorist networks in Europe has been extremely alarming. It seems that the European governments are now aware of the mullahs’ terrorist threats. The time to turn a blind eye on the destructive role of the mullahs’ spy nests is over.

It is not a secret that the Iranian regime has abused its embassies to mastermind terrorist conspiracies.

The role of mullahs’ spy nests in terrorist operations

For decades, the Iranian regime has been known as the state-sponsor of terrorism. Latest incidents in Europe revealed the regime’s shameless misuse of embassies more than ever.

Though an embassy, as the diplomatic representative of a country, is to establish relations, the regime has turned its embassies to mullahs’ spy nests.

At a glance, any impartial observer can find the footprint of mullahs’ spy nests in the regime’s terror plots abroad. Published evidence prove the involvement of the mullahs’ spy nests in the AMIA Bombing in Buenos Aires, the assassination of Dr. Kazem Rajavi in Vienna and Mohammad Hossein Naghdi in Rome. The footprint is also evident at the kidnapping and the terror of some prominent figures of the Iranian opposition in Turkey.

Foiled terror plots in France and Denmark too, clearly show the role of the mullahs’ spy nests.

Pointing to the disclosure of the link between mullahs’ spy nests and the foiled terror plots in France and Denmark, the United States Ambassador to the United Nations said:

“We have seen that no more profoundly than over the last months, where multiple European countries publicly decried Iranian attempts to murder dissidents on their own soil.

Ambassador Nikki Haley added: “But Denmark is not the only country that has been targeted by the regime.”

The Danish allegations came just days after the French government accused Iranian intelligence of plotting a bomb attack on an Iranian opposition rally in Paris in June. In this plot, a Belgian husband and wife of Iranian origin were arrested along with a high ranking Iranian diplomat in Austria.

The diplomat provided the directions and the explosives for the husband and wife team to bomb the Iranian resistance gathering, which included United States citizens. All three were arrested.” 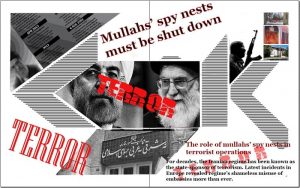 Nowadays, the role of the MEK in organizing nationwide strikes is well admitted by the regime’s official media.

“Unable to restrain resistance units at home”, the regime is compelled to take action against its arch-enemy (MEK) abroad as its only way of survival.

The mullahs’ spy nests are tasked to assassinate dissidents, especially the MEK members, at any price.

Physical and character assassinations are on their agenda.

A look at Iran’s foreign media lobbies is the proof.

How can the mullahs’ spy nests’ threats be countered

It is worth reminding that terrorism and warmongering are the core traits of the theocratic regime ruling Iran. Thus, it is wrong to expect the regime’s embassies and consulates not to be the mullahs’ spy nests.

A while ago, on the World Day against the Death Penalty, Mrs. Maryam Rajavi, the president-elect of NCRI, addressed a message to the participants in a conference at the District 5 Municipality of Paris.

In part of her remarks Mrs. Maryam Rajavi mentioned: “I urge the world’s governments to stop their political and economic relations with the Iranian regime unless the regime ends torture and executions of prisoners and abandons its involvement in terrorism.”

Undoubtedly, the civilized world will not be safe from the threats of terrorism until the mullahs’ spy nests continue their mission. It is necessary that the EU governments inspect the mullahs’ spy nests and “exclude Iranian intelligence personnel from European Union Member States.” (the EU declaration of April 29, 1997)

In conclusion, as the statement by the Security and Counterterrorism Committee of National Council of Resistance of Iran (NCRI) restated on November 11, 2018: “Considering the terrorist plots of the MOIS in Albania, Belgium, France, the United States and Denmark, and the arrest and expulsion of diplomat terrorists, the Iranian resistance once again emphasize on the immediate need of the inclusion of the MOIS in the US and EU terror lists as well as the arrest, punishment, and expulsion of the agents of the religious fascism.”

MEPs: Iran’s Agents Are A Major Threat To The MEK In Albania