Leaders in this year’s G7 Summit, hosted by Canada, issued their final commns Iran’s ballistic missile program, support for terrorist groupsmunique emphasizing the Iranian regime must not obtain nuclear weapons and condemning Tehran’s financial support for terrorism. The G7 leaders also condemned Tehran’s financial support for terrorism, including Iran-backed terrorist groups. Trump emphasized he will only strike a deal with Iran that is first discussed with the U.S. Congress, adding he will not carry out his measures similar to former U.S. president Barack Obama.

The Iranian regime’s so-called parliament postponed the approval of a bill calling for Tehran’s approval and entrance into the Financial Action Task Force (FATF) convention focusing on anti-money laundering measures.

The regime’s parliament members have agreed to postpone any review of this bill for at least two months until the result of negotiations with Europe are clarified. 138 yes votes over 103 votes against and six abstainers. “The only solution in joining this convention is that it enables the Americans to pinpoint their sanctions. Listen carefully. These are expressions exchanged between diplomats of the U.S. and Europe. They say now that the Islamic Republic of Iran has precision missiles, we need to have precision sanctions,” Hosseini claimed.

Iran’s regime and the FATF dilemma: Founded in 1989, the Financial Action Task Force is an international government organization aiming TO combat money laundering, especially by rogue states. Iran’s regime succumbing to international demands of signing into this framework will result in grave consequences. Refusing to do so has the potential of inviting, even more, punishing sanctions for Tehran. Despite the arguments, clear is the fact that the Iranian regime in its entirety is facing a major impasseTruly, the time has come for these countries to start thinking about their long-term benefits, and their own security, to confront the Iranian regime’s long slate of belligerence. 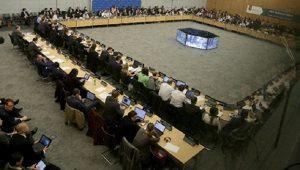 A top Iranian official has admitted for the first time that Iran knowingly helped al-Qaeda terrorists — including some of the 9/11 attackers — travel secretly through the Middle East.

“Their movements [through Iran] were under the complete supervision of the Iranian intelligence,” Mohammad-Javad Larijani said in a recently surfaced interview.

That was one of the main accusations leveled against Iran in the U.S. government’s 9/11 Commission Report, which named Iranian regime as a state sponsor of terrorism