Mrs. Maryam Rajavi, the President-elect of NCRI hailed the 120,000 valiant children of Iran, including the political prisoners massacred in 1988, who were executed by the regime for fighting for freedom

Paris: Conference and Exhibition on the occasion of the World Day against the Death Penalty

On Wednesday, October 10, 2018, a conference and an exhibition were held in the District 5 Municipality of Paris, titled “Iran: Executions inside the country, and Exports of Terrorism abroad”.

The event was organized by the French Mayors’ Committee for a Democratic Iran, and was participated by France’s mayors and personalities. The images and documents of the mullahs’ crimes were displayed, including the massacre of 30,000 political prisoners in 1988, and the continuing wave of executions, as well as the history of the terrorist activities of the Iranian regime.

Florence Berthout, mayor of Paris’s district 5, Jean-François Legaret, mayor of district 1 of Paris, Jean Pierre Muller, mayor of Magny en Vexinh, and Mayor Bruno Macé, and a number of other French political and religious figures, as well as Dr. Alejo Vidal-Quadras, Chair of ISJ, and Former VP of European Parliament and Ingrid Betancourt, attended the conference and addressed it. 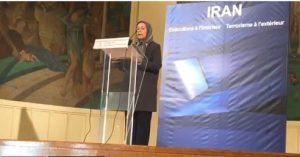 Mrs. Maryam Rajavi, the President-elect of the National Council of Resistance of Iran (NCRI), sent a message to the conference which was read by Ms. Sarvnaz Chitsaz, the Chair of the NCRI Women’s Commission.

In her message Mrs. Maryam Rajavi stated: “The World Day against the Death Penalty is to promote a universal value to defend the sanctity of human life. At the same time, it points the finger at the mullahs’ theocratic regime for being the world’s top record holder of executions and for relying on massacres.”

Mrs. Maryam Rajavi, the President-elect of NCRI hailed the 120,000 valiant children of Iran, including the political prisoners massacred in 1988, who were executed by the regime for fighting for freedom and emphasized:

“Thanks to the Iranian people’s Resistance and uprisings, freedom and popular sovereignty are looming in the horizon. The day is not far when the Iranian people will be able to live free from the menace of executions and torture, and Iran will become a garden blessed with freedom and justice.”

Jean-François Legaret paid tribute to the 30,000 victims of the 1988 massacre in Iran, before recalling that “these barbarities still continue.”

The Mayor of the 1st District also discussed the foiled bombing against an Iranian opposition rally in Paris last June.

“An Iranian minister who sponsored the attack on Villepinte,” he said. “The Iranian regime is desperate and is trying to execute those outside, who stand in solidarity with the resistance in Iran,” said Legaret.

“I call on the French government to launch an international investigation under the auspices of the UN to shed light on this state terrorism and the barbarities in Iran.” 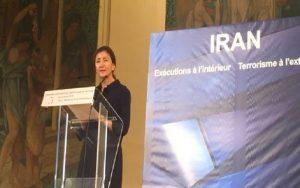 Former Colombian presidential candidate Ingrid Betancourt also addressed this attempt to “eliminate once and for all, a friend who is dear to us, Mrs. Rajavi, who carries the torch of this Iranian opposition.”

The former FARC hostage emphasized it is the Iranian diplomatic network that sets up this terrorist plot. She praised the French government for its courage, for standing up to Iran’s pressure and for demanding accountability. Betancourt called upon EU foreign policy chief Federica Mogherini “who did not have a word to denounce the facts of the terrorist attack in Villepinte.”

The former senator asked all those who were present in Villepinte, like her, to file a civil suit case now opened in Belgium regarding this attack. 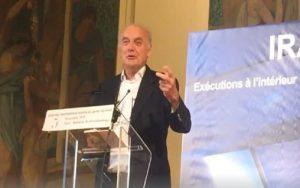 Jean-Pierre Brard, Mayor of Montreuil, spoke about the June terrorist plot near Paris, emphasizing “the attack not only targeted the resistance, but it also targeted our country. This embodies the hate seen in the mullahs.”

“A fascist is always a fascist,” he added.

The Mayor of Montreuil joined the idea raised by Ingrid Betancourt to launch a civil case regarding the foiled Paris plot.