The only way for the region to survive is extermination of Iran regime : On Monday June 3, 2017, Saudi Arabia’s al-Riyadh newspaper in an article titled “Velayat-e faqih, a regime in downhill,” wrote: “A number of participants in the Iranian Resistance grand gathering in Paris expressed their optimism about the overthrow of the Iranian regime after the glorious presence of Iranian dissidents and political, parliamentary and military figures from five continents.”

“Participants said that the Iranian people’s participation in Iran’s resistance and other constituents and the support of these efforts by the international community is indispensable for the overthrow of the terrorist regime in Tehran.”

Dr. Sanabargh Zahedi, chair of the NCRI’s judicial commission, told al-Riyadh: “The statements made by Mrs. Maryam Rajavi, President of the National Council of Resistance of Iran, on the situation in Iran at this gathering is the best interpretation of the conditions that the Iranian people are in. Mrs. Rajavi explained that the issue of Iran and the regional crises cannot be solved except by overthrowing the regime of Velayat-e faqih, and this regime must be overthrown in order to solve the economic, social and political problems in Iran, as well as to end the crises, killings, problems and wars in the Middle East, which means that it is impossible to reform this regime or to restrain or restrict the actions of the regime considering its failed policies, as the promises given by the regime have proven that the regime cannot be honest”

“The National Council of Resistance of Iran (NCRI) also has specific programs in all areas of human rights and minorities in Iran to bring peace with its neighbors and the international community, 25 commissions of this council and the thousands of PMOI (MEK) cadres do not want anything other than democracy and the freedom of the people of Iran and get rid of the regime of Velayat-e faqih,” Zahedi said.

“Zahedi added that the grand gathering in Paris in 2017 was a testimony to the fact that at the international level the Iranian regime is the regime of Velayat-e faqih is a shaky regime and has been revealed to the world as a source of crime and terrorism, as the people of Iran proclaimed with their participation and support at the gathering that they do not want this regime and want to overthrow it, and the countries of the world should recognize this right of the Resistance.”

“Zahedi said the People’s Mojahedin Organization of Iran (PMOI/MEK) was established 51 years ago in opposition to the Shah’s regime and its revolution and became the backbone of the Iranian Resistance, after which the National Council of Resistance of Iran was formed, which is the central organization of the resistance movement.”

“The Iranian Resistance, the People’s Mojahedin Organization of Iran, was able to expose the ideology of Khomeini and the mullahs and the theory of Velayat-e faqih that is considered to be religious fascism during this time. But achieving this goal required a huge demand, and 120,000 of the best children of the Iranian people who were sympathizers of the Mojahedin Organization were executed by the Khomeini regime and the mullahs in Tehran.”

“” Zahedi said.The Iranian Resistance revealed the regime’s crimes and actions committed against people of Iran and the people of the region on the international level, and exposed the security and criminal acts of this regime and the torture and execution of the Iranian children in prisons which brings shame to the mankind. As the clerical regime has been condemned for 63 times in the highest international organizations and international bodies, Iran’s Resistance has also exposed the terrorist acts committed by the Khomeini regime and the mullahs against the Iranian people that have also targeted other countries,”. 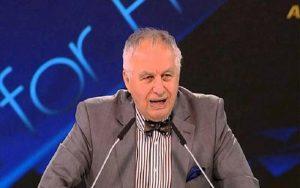 Al-Riyadh added: “On the other hand, Dr. Saleh al-Gholab, former Jordanian Minister of Interior, said that his presence in this gathering was to emphasize the fact that the Fascist regime ruling Iran must be overthrown. He added that the Iranian regime dispatched children of Iran to Iraq, Syria and Yemen to be killed and the regime is the main source of export of crises abroad and we call for the formation of a front of the noble fighters for the release of the Iranian people from this blood-thirsty regime….”

“Former Jordanian Minister of Interior added that all Iranian people support Iranian Resistance and watch the annual grand gathering of the Resistance in which tens of thousands of Iranians participate.”