For 4 decades, the civilized world has monitored the human rights violations committed by the mullahs’ regime. There has not been a day without human rights abuses in Iran in that period. The Iranian and international human right activists, writers, and NGOs have never been ignorant of that.

The cases of human rights violation under the ruling mullahs include torture, rape, juvenile execution and of course torture and execution of political prisoners, dissidents and minorities, etc.

Being systematic is the remarkable characteristic of these inhuman actions. Accordingly, the UN General Assembly has paid special attention to the human rights abuses in Iran, issuing 65 resolutions in condemnation so far. The last one adopted was on Nov. 15, 2018. 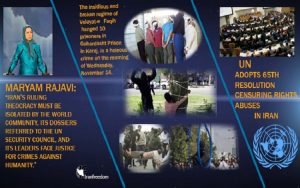 Following the human rights violations in Iran, the General Assembly has dedicated a special rapporteur to the situation of human rights in Iran from 1984.

The Iranian regime has refused to issue them the visa to enter the country except for one case.

The General Assembly’s Human Rights Committee adopted the resolution by a vote of 85-30, with 68 abstentions, after reviewing detailed reports filed by its special rapporteur. It is virtually certain to be approved by the 193-member world body next month.

In the resolution, the committee expressed its concern over the high number of executions, dire prison conditions, torture and arbitrary arrests in Iran.

Referring to the reports of the United Nations Secretary-General and the Special Rapporteur on Human Rights on Iran, the resolution states, that the Iranian government has increased suppression of protesters, journalists and social network users over the past year.

UN Special Rapporteur:  an upsurge in executions and suppression in Iran

The representative of the United States urged Iran to grant unrestricted access to the Special Rapporteur.  She condemned the crackdown on the nationwide protests voicing concern over the detention of 800 protestors.

“The adoption of this UN resolution by countries from every region of the world sends a strong message to the Iranian regime that it must respect human rights.

“It also voices the support of Canada and the international community for the people of Iran in their struggle to enjoy the rights and freedoms to which they are entitled. Canada urges the Iranian regime to address the grave human rights concerns raised in this resolution.”

Considering the regime’s other crimes and repressive policies which the resolution fails to enumerate, including systematically assassinating opponents abroad, and depriving the people of Iran of their rights to decide their country’s fate, to enjoy the rule of law, to have access to fair trials, to have free access to information, and to form independent syndicates and unions for workers, students and government employees, it is safe to say that the Iranian regime is the most ruthless, aggressive violator of human rights in the world today.

“Condemning the systematic and gross violations of human rights by the theocratic regime ruling Iran, the UN resolution once again confirmed that the regime blatantly tramples upon the Iranian people’s most fundamental rights in all political, social and economic spheres,” said Mrs. Maryam Rajavi, the President-elect of the National Council of Resistance of Iran, in welcoming the 65th UN resolution condemning human rights abuses in Iran.

Maryam Rajavi reiterated, “The most vivid example of grave violations of human rights in Iran is the 1988 massacre of political prisoners perpetrated by the regime’s key institutions and leaders, who are still in power, still defend this crime, and remain immune from punishment.

The world community faces a monumental test in investigating and prosecuting those responsible for this great crime against humanity.”

The adoption of the 65th UN resolution, condemning #HumanRights abuses in #Iran, once again confirms that the regime blatantly tramples upon the Iranian people’s most fundamental rights in all political, social and economic spheres.

#Iran’s ruling theocracy must be isolated by the world community, its dossiers referred to the UN Security Council, and its leaders face justice for crimes against humanity#HumanRightshttps://t.co/xGRy961SWp … pic.twitter.com/sSEZ2Rt9nQ

The world community must refer to the dossiers of the regime’s crimes to the UN Security Council and recognize the right of the people of Iran to resist against so inhuman a regime.

UN Special Rapporteur:  An Upsurge In Executions And Suppression In Iran

Human Rights Abuses In Iran, Against The Most Basic Rights

Violation Of Human Rights In Iran

United Nations-Geneva: Speech By Dr. Alejo Vidal-Quadras At The Conference On Human Rights In Iran