On Monday, October 22, 2018, the supporters of the Iran resistance in Brussels, in front of the European Commission, staged a rally calling the European Union to enlist the Iran regime’s Ministry of Security and Intelligence (MOIS) as a terrorist entity. It is after some four months of a foiled terrorist plot aim to target a dissident Iranian conference in the heart of Europe.

The protesters gathered to condemn the European Union ’s silence to mass executions, human rights violations, and repression of women in Iran.

Assadollah Assadi, the third Consular in the Iran regime embassy in Vienna, hired an Iranian couple living in Belgium. Assadi, himself, provided them with 500 grams of TATP explosives at a meeting in Luxembourg in late June 2018 to carry out a bomb plot, targeting the annual meeting of about 100.000 Iranian dissidents, supporters of the Paris-based National Council of Resistance of Iran (NCRI), which is the umbrella political organization including the People Mojahedin Organization of Iran (MEK/PMOI) at Villepinte, near Paris.

Assadi was arrested in Germany on terror charges and then was extradited to Belgium. He is accused of planning a terrorist act with the potential of immense casualties.  The Iranian-root couple and another Iranian man have been arrested. The case is still under investigation by the Belgian judicial authorities.

French officials stressed that there was “no doubt” that Iranian Ministry of Intelligence was behind the plot to attack the rally.

“We expect EU today to break the silence. We want EU to be active and to be on the side of Iranian people,” said Firoz Mahvi, Member of the National Council of Resistance of Iran (NCRI). 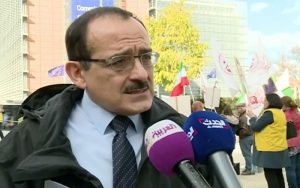 Firouz Mahvi, Member of the National Council of Resistance of Iran (NCRI)

“I was among the people who were there on June 30,” said Paulo Casaca, a former member of the European Parliament. “So I can say that, even personally, I have a case here to the European External Action Service (EEAS) and there has not been a single word from the EEAS on the issue,” he added following his statement at the protest in front of the EU Commission. 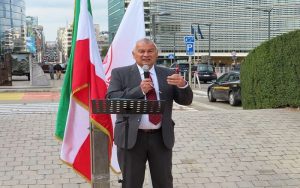 Paulo Casaca, a former member of the European Parliament

The Iran regime’s Ministry of Security and Intelligence (MOIS) has a dark record of planning and carrying out terrorist plans abroad, but it is the first time that a so-called diplomat is arrested and officially charged of terrorism.

#Iran' diplomats are systematically engaged in #terrorism & espionage.
The decisions for terrorist operations are made at the National Supreme Security Council presided by Hassan Rouhani, and subsequently approved by #Khamenei pic.twitter.com/3v1iDSya85