Introducing the sanctions last Tuesday, the United States Treasury Department said in a statement that the network of businesses that were targeted by the new sanctions provide financial support to Basij Force, that trains child soldiers for the IRGC.

The new US sanctions on October 16, targeted some 20 companies and financial institutions that finance Basij Force, a paramilitary organization linked to the Islamic Revolution Guards Corps (IRGC).

The United Nations should condemn and audited the Iranian regime of using children in war.

On Thursday, October 18, U.S. Ambassador to the United Nations Nikki Haley strongly condemned Iranian regime’s Basij Force (mobilization) its alleged recruitment and use of child soldiers in battlefields across the Middle East.

Who Is The Basij Force Targeted By The US New #Sanctions? The #UnitedNations should condemn and audited the Iranian regime of using children in war. #Iran #Terrorism #IranRegimeChange #MEK #ExpelIranDiplomatTerrorists https://t.co/EMZiHHc9kY … pic.twitter.com/uxYcQDv75V

“Iran’s Basij Force indoctrinates school children and provides combat training to children as young as 12 years old. These children are then coerced into fighting abroad for the Islamic Revolutionary Guard Corps (IRGC)”. Haley said Thursday during a U.N. Security Council meeting in her speech about the situation in the Middle East.

She stated that: “The Basij Resistance Force is a paramilitary force operating under Iran’s Islamic Revolutionary Guard Corps (IRGC) In addition to cracking down on dissidents in Iran, the Basij indoctrinate school children and provide combat training to children fighting abroad for the IRGC.

Since the beginning of anti-government protests in Iran, the Basij force has grown increasingly more infamous as people are getting a better feel of who these criminal plainclothes agents are.

But who are the Basij forces and where do they fit-in within the Islamic Republic’s military structure?

On November 26, 1979, the “Basij of the Oppressed” force (mobilization of the oppressed) was established in Iran by orders of the then-supreme leader of the Islamic Republic, Ayatollah Khomeini.  He defined the Basij’s function to be defending militarily the objectives of the Islamic revolution.

The overall structure of the Basij Force

The Basij forces are basically one of the suppression gear of the clerical regime in Iran operates under the direct command of the Revolutionary Guards and is used in variety of missions. 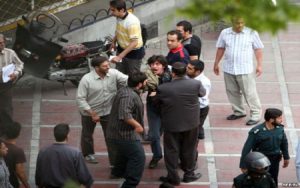 Protester being arrested by plainclothes during anti-government protests.

But, the Special Forces, are military or as they may be called paramilitary forces. This group of Basijies carries military ranks alongside IRGC.

According to Iranian law, the Basij can act as Judicial Officer and enforce court rulings, while this is clearly the duty of the police.

Based on the experience, since at least early 2015, the Iranian regime has used the Basij to recruit and train Iranian children to fight in Syria in support of the brutal Assad regime. The Basij also uses teen Afghan immigrants in Iran, some as young as 14 years old, to fight in Syria. 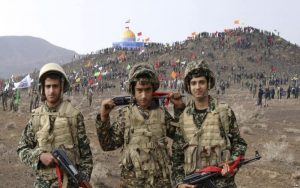 Members of the Basij, the paramilitary unit of Iran’s Revolutionary Guard, pose for a picture during a military exercise outside the holy city of Qom, central Iran.

According to the Foundation for Preservation and Promotion of the Sacred Defense Values (the 8-year Iran-Iraq war) an affiliate of the Iranian Armed, during the eight-year war with Iraq, 550,000 students were sent to battlefields, more than 33,000 school students were killed, 2,853 were injured and 2,433 were taken prisoner. 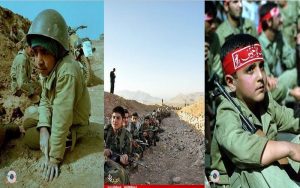 Students as young as nine were used in an inhuman way as cannon fodders during the eight-year war. They created human waves in order to clear out large minefields or help launch IRGC attacks against the Iraqi forces.

In 1984, with the enactment of the military Draft Law, the Ministry of Education was required, in conjunction with the IRGC’s Basij force to provide defense training to students. This way the student’s Basij emerged as an independent management.

In 1992, the Basij Force commander and the Minister of Education signed an agreement. Based on that agreement, a wide-ranging measures were taken in all provinces to expand students’ Basij. In a year time, they created 12,000 students’ Basij offices in secondary schools. 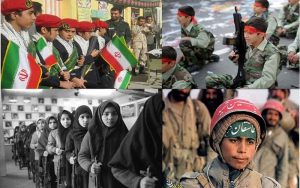 Basij, The Oppressive Arm Of The Iranian Regime

And in 1996, the mullahs’ parliament, in order to expand and strengthen the students’ Basij, ratified a law mandating the Ministry of Education to support and strengthen students’ Basij.  This way, under the pretext of student mobilization, the use of children for war took a legal and formal form.

Every year since then, on October 30, Iran celebrates “Students’ Basij Day.

It is important to mention that when Khomeini was asked to issue a Fatwa (religious decree) over the “Necessity of the parents’ consent on deploying the children to combat fields”, he stated, “As long as the combat fields need soldiers, it is obligatory to go there, unconditioned to parents’ permissions.”

(The book “War and defense in Khomeini’s thought”, page 136)

According to international law, the recruitment and use of children by the Iranian regime during conflicts is one of the six grave violations identified and condemned by the UN Security Council.

Therefore, the international community must follow up efforts to bring an end to Iran’s impunity and secure justice for the victims.

The United Nations must condemn the Iranian regime and hold it accountable for recruiting children as
soldiers.