Panel discussing the ousting of the Iranian regime terrorism During the “Free Iran” rally on July 1st, a panel discussed the overthrow of the clerical regime in Iran and the end of war and terrorism in the Middle East.

The Chairman of the Foreign Affairs Committee of the National Council of Resistance of Iran (NCRI), Mohammad Mohaddessin, thanked the participants for attending on behalf of the President-elect Maryam Rajavi. 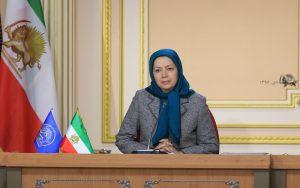 He kicked off the discussion by saying that the Iranian regime has been very aggressive towards Muslims, Shias and Sunnis alike, and said that its failings in Iraq are hampering plans for its Shiite Crescent control of the region.

He also highlighted that the regime is weakening because of the recent election disaster where the Supreme Leader Ali Khamenei failed to engineer the result he wanted.

Mohaddessin called on Arab countries to help the Iranian Resistance in its efforts to prove that Iran is the biggest destabilizing force in the Middle East. 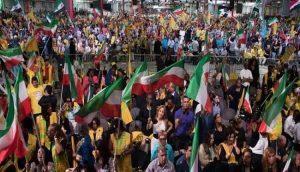 Former Minister of Information and Culture of Jordan, Saleh Ghalab, said that the “fascist” regime has occupied capitals across the region, in particular in Iraq, Syria, and Lebanon. He said: “We need an international front to topple the Iranian regime, everyone can participate.”

Speaking about the regime’s belligerence in Bahrain, a Member of Parliament from the country, Jamal Ali Jassim Bu Hassan, said: “No other regime has done greater damage to Bahrain.” He added: “The MEK and the Iranian Resistance work day and night, but we need to work with the MEK to destroy the Iranian regime… [the Bahrain government] support the MEK by all means.”

A Member of Parliament from Palestine, Dr. Sahar Alghavasemi, said that she believes the relationship between states needs to change on both an international level and also on an internal level.

Former chief of human rights of the United Nations Assistance Mission for Iraq (UNAMI) and special advisor to the Special Representative of the Secretary-General Tahir Boumedra said that the crimes committed by the regime are cruel and must be punished.

Sid Ahmed Ghozali, the former Algerian Prime Minister, spoke about the suffering of the Iranian Resistance during the past 38 years and how far it has advanced.

He highlighted that there were initially not very many supporters of the MEK from the EU, but now it has come so far that it enjoys the support of most EU parliaments.

Struan Stevenson, Former European lawmaker and President of the Friends of Free Iran Intergroup, said that the Iranian regime is attempting to destroy the Middle East.

He also criticized the foreign policy of the West. “It is bizarre that we see Iran as our ally against ISIS in Syria and our enemy in Iraq.” He also criticized the nuclear deal for providing the mullahs with over $150 million. This money, he pointed out, was spent on war and terrorism instead of paying the country’s workers.

Abdul Karim Bashar, prominent political analyst, Member of the Syrian Opposition Coalition and former member of European Parliament from Portugal, said that it is the responsibility of everyone to help to confront the Iranian Regime terrorism.

Hammami Jillany, an MP from Tunisia, emphasized that the Iranian regime terrorizes its own people too, not just people abroad.

Iraqi lawyer, Sheikh Matlab, said that Iran infiltrated and occupied Iraq at a time when Iraq should have been renewing itself.

Hisham Najjar from the Syrian Opposition Coalition said that he supports the MEK in its fight against the Iranian regime and highlighted that they both are fighting their own respective dictators.

Member of Parliament from Palestine, Mohammed Alham, thanked the MEK for its support after the death of Yasser Arafat, first President of Palestine

. “The MEK, in the middle of their struggle, were the first to honor Yasser Arafat when he died. We have to unite to overcome colonialism, sectarianism, fundamentalism and extremism.”

Former member of European Parliament, Paula Casaca, said that the Iranian regime terrorism must be stopped in its quest to firstly seek dominance in the region and then the rest of the world.

Director of Yemen Center for Human Rights, Jamal Al Awazi, said that the MEK is an ally in the fight against extremism.

Iraqi lawyer Mohammed Alsheikhli closed the event. He said that he was proud to be part of an event like “Free Iran” and said that the Iranian regime must be held accountable for its crimes, in particular the 1988 massacre of political prisoners

. He said that legal action must be taken against the Iranian  regime terrorism as it should not be allowed to get away with its war crimes and crimes against humanity.

What do you know about the Free Iran Gathering?