Iranian Teachers strike another warning for the mullahs

The strike and sit-ins of Iranian teachers and educators expanded to dozens of Iran’s cities.

The Iranian teachers in dozens of cities across Iran began their nationwide strike on Sunday, Oct. 14, 2018, protesting poor living conditions, problems with their jobs and heavy security measures imposed in their schools. 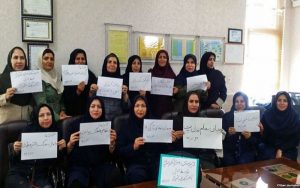 The strike and sit-ins of Iranian teachers and educators expanded to dozens of Iran’s cities.

The Iranian teachers’ strike was based on a previous call to protest against the pressures and injustice.

The teachers also demanded the release of their colleagues who are imprisoned by the mullahs regime.

The students in different cities supported the teachers’ strike.

The Iranian teachers on strike also objected the violation of the right to free education for all, non-standard and insecure schools, the country’s gross drop in the quality of the education, the low level content of educational books, the much higher than standard number of students in the classes, and the inadequate educational budget.

#ran– #Teachers in dozens of cities across Iran are launching a nationwide #strike on Sunday, protesting poor living conditions, problems with their jobs and heavy security measures imposed in their schools.#IranNationwideStrike https://t.co/RW6n5tji0G

In their strike, the teachers held up signs with their demands written on them: “The teacher’s place is not in prison”, “We are protesting discrimination,” The teachers must not be the subject of discrimination”, “No to the privatization of education”.

The participation of the Iranian teachers in the sit-ins has been extensive and throughout Iran.

Even in some rural schools in deprived areas with only one teacher, still the sit-in was held.

The Coordinating Council of Teachers Syndicates in Iran (CCTSI) had called upon teachers to cancel classes and to hold sit-ins in their schools on October 14 and 15.

Iranian teachers reason for the strike

The council declared the following issues as the reason for the teachers strike:

Teachers also demand the removal of any kind of discrimination from the structure of the educational system, the freedom of imprisoned teachers, the right to organize and the right to strike, an end to the violation of the right to free education and enjoying comprehensive insurance.

The CCTSI did announce that the sit-in was only for two days and stated that if the Iranian teachers receive no significant response from the educational officials to their demands, the protest will become more intense in the coming months.

Iranian teachers had also gathered on May 10, 2018, to protest the condition of their livelihoods in front of the planning and budget Organization; a number of teachers were arrested.

Mohammad Habibi, a member of the Tehran Teachers Guild Club, was one of the detainees of that day, who has been kept in jail since then.

Iranian #teachers' strike for second day in #Iran against the Mullahs”This round of strikes by teachers is happening in parallel 2 a widespread strike by truck drivers and has expanded 2 more than 300 cities across the countryhttps://t.co/sXbF3mEYYQ#IranProtests@AP @FoxNews

The Islamic Republic’s judiciary has sentenced Habibi to 10-and-a-half-year in prison; seven years for “acting against the national security,” 18 months for “propagation against the government,” and a further 18 months for “disturbing public order”. He is also sentenced to a two-years ban on political and social activities and receiving 74 lashes.

In addition to him, six other detainees of this protest gathering were also sentenced to 9 months in prison and paying fines.

In part of their statement on Oct. 1 the CCTSI warned against its suppression by security forces.

It is to be reminded that this is the second time that the Iranian teachers are going on strike. Earlier this year, teachers across the country took into the streets to protest against discrimination, imprisonment of political activists and economic woes. This round of strikes by teachers is happening in parallel to a widespread strike by truck drivers across the country, which lasted for more than three weeks and has expanded to more than 300 cities across the country. Last week, a separate strike by merchants and shop owners covered dozens of cities.

The teachers’ strike, at the heels of the strike by hardworking truckers and the bazaar strike, shows the general popular desire for regime change. For as long as the criminal and corrupt mullahs are in power, high prices, recession and poverty and the path to environmental destruction will continue; the only solution to this national crisis is the establishment of democracy and popular rule in Iran.

Maryam Rajavi saluted the noble teachers who have staged sit-ins against the tyranny of the clerical regime, saying: “The catastrophic situation of the employed and retired teachers is the product of the repressive policies of the anti-cultural regime of the mullahs, and as long as this regime is in power, it will even get worse.”

Maryam Rajavi: "The catastrophic situation of the employed and retired teachers is the product of the repressive policies of the anti-cultural regime of the mullahs, and as long as this regime is in power, it will even get worse.”#Iran #IranProtests#IranNationwideStrike pic.twitter.com/HdwcnSNhx6

She called the general public, especially the youth, to express solidarity with the educators who face a variety of discrimination and problems, saying that the strike of teachers and academics in the wake of the strike of toiling truck drivers and merchants’ strike last week showed a flare of fury of public anger and hatred toward a regime that has only brought torture and execution, war and terrorism, poverty and unemployment, and corruption and plundering for the people of Iran.

Related to strike in Iran